The Chilbi Bock
Chilbi (pronounced "kill-be") is one of those events that's easy to say what it is, but the why they do it is more complicated.

In short, the event is all wrapped around a raffle (called the Bockverlosung - Bock Raffle) to win the Chillbi Bock. The winner has the "priviledge" of hosting (and paying for) a lavish meal for important people of the town, including civic, certain groups including the Junggesellenschaft (the young, unmarried men of the town), and friends and family.

"Hang on? Have I got this right? The winner has to pay out a lot of money to host a meal? That's crazy!"

Exactly! So, the next question is why would anyone take part?

Only certain people get the chance to buy a ticket in the draw. The Junggesellenschaft are quite powerful in the town (with most of the members coming from important families) and they generally know who could (and who could not) afford to host a meal. So they only go to those who have successful businesses, those that have made their money, etc. Those people are then invited to buy a ticket - for €1!

By being invited to take part, (and winning), you are showing that you are successful enough that you can host the meal. This is why it is seen as such a great honour.

"Okay, I get that, but where does it come from?"

It goes back over 500 years to when the Swiss army was trying to invade Waldshut. The army laid seige to the town, thinking the people had very little food left and wouldn't be able to last very long.

One enterprising young man came up with the idea of fattening up one of their remaining rams, and parading it through the town. Seeing this, the Swiss army was fooled into believing the people of Waldshut must have enough food to last for a long time, why else would they feed their animals so well. So the army gave up and went home... and that is where the Chilbi event came from.

So, there is now the annual Chilbi bock "raffle". But with something this important they're not going to just pick a ticket out of a hat. No, they have their own unique way of choosing the winner. 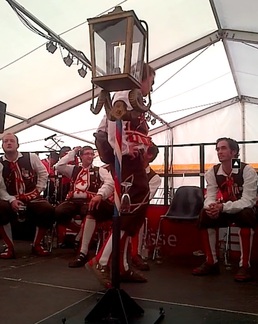 As you can see from the above picture there is a lit candle and if you look about half way down is a wine glass suspended by thread. The other end of the thread is tied to the candle.

The candle is lit, and each member of the Junggesellenschaft take it in turns to count. The first one from 1 to 100, then the next one takes over and continues to 200 and so on. They keep counting until they have reached the highest number ticket they sold.  They then start from 1 again.

During this time the candle continues to burn and slowly gets closer to the thread. When it reaches it, it burns through it and the glass falls. The number they have counted to at this point is the winner!

The following four minute video gives a good idea of how happy they are when the winner, Thomas Adlung, is chosen.
"Okay, I got it all, but one more question. What happens if it turns out the winner can't afford it?"

The Junggesellenschaft thought about this and so earlier in the year they choose a Bockgötti who's main role is to "look after" the bock. (We assume he pays for its upkeep, he doesn't actually give it a home.) However, we have been told he is also the "insurance" for the meal, so that if the winner cannot afford to pay, then the Bockgötti will help out financially. Therefore, during the celebrations he is treated with almost as much respect and celebrity as the winner, and they will usually be together for the rest of the event. The 2017 Bockgötti was Giberto Cammisa.

This draw takes place on the Sunday afternoon. From past evidence, the winner, Bockgötti and Junggesellenschaft have an afternoon of, erm, relaxing with a "few" drinks. But they are on procession again later when they go through the main street of Waldshut.
The whole of Chilbi is great fun and, while the main event is on the Sunday afternoon, there are different things happening from the Friday with the official opening through to the following Wednesday and ends with a final concert and firework display.